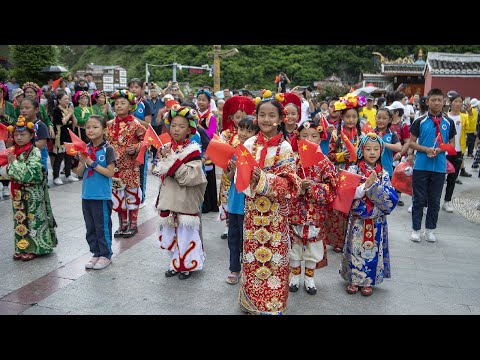 BEIJING, Aug. 30, 2021 /PRNewswire/ — An unequivocal message concerning China’s ethnic affairs has been conveyed at a two-day meeting that concluded Saturday, as China, a unified multi-ethnic country, embarked on a new journey to fully build itself into a modern socialist country.

Forging a strong sense of community for the Chinese nation must be the focus of the Communist Party of China’s (CPC) work on ethnic affairs in the new era, said President Xi Jinping while addressing the central conference on ethnic affairs.

The central conference on ethnic affairs, held in Beijing on Friday and Saturday, was the fifth conference of its kind since China’s reform and opening-up, following those in 1992, 1999, 2005 and 2014.

Consolidating sense of community for the Chinese nation in new era

Summarizing past experience, Xi said the CPC’s work on ethnic affairs should serve the goal of realizing the great rejuvenation of the Chinese nation and efforts should be made to enhance ethnic unity and promote common prosperity among all ethnic groups. He also underscored the importance of safeguarding China’s sovereignty, security and development interests, calling for efforts to strengthen patriotism among all ethnic groups.

Consolidating the sense of community for the Chinese nation is necessary for protecting the fundamental interests of all ethnic groups, realizing national rejuvenation, and developing socialist ethnic relations characterized by equality, unity, mutual assistance and harmony, he said at Saturday’s meeting.

Xi called for innovation and development in CPC’s work on ethnic affairs so as to better protect the legitimate rights and interests of all ethnic groups. An important principle is to enhance commonalities while respecting and tolerating differences, he said on Saturday.

Xi called for efforts to accelerate socialist modernization among all ethnic groups. Differentiated policies should be made to support the reform and opening-up in ethnic minority regions, he said. The sense of gain, happiness and security should be enhanced for people of all ethnic groups, he stressed.

Exchanges and integration among ethnic groups should be encouraged, he said. Measures should be taken to create an environment where people of different ethnic groups can embed themselves spatially, economically, socially and psychologically, he said.

Xi stressed the importance of preventing major risks related to ethnic affairs. Ideological issues that involve ethnic elements should be handled actively and properly, he said, adding that continuous efforts are needed to eradicate separatist and extremist ideas. He also called for strengthening international cooperation in fighting terrorism.