WASHINGTON, July 28, 2021 /PRNewswire/ — The Coalition Against Online Violence today launched an Online Violence Response Hub to aid women journalists with the rising threat of violence online. The Coalition is led by the International Women’s Media Foundation (IWMF) with funding from Craig Newmark Philanthropies, the Emerson Collective, Jigsaw, Knight Foundation, and the Luminate Group. This first-of-its-kind suite of support will provide women journalists with ways to fight back against online violence while protecting their privacy, accessing trauma support, pursuing accountability, and continuing to work without self-censorship. 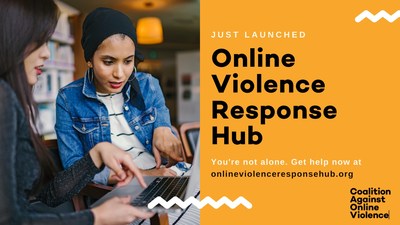 If we don’t address the epidemic of online violence, we eliminate the future of diversity in storytelling.

The Online Violence Response Hub – offering the latest information on online abuse – allows journalists to focus on their safety instead of searching for support with censorship, doxing, harassment, threats, trolling, and more. The hub is a project of the IWMF and the International Center for Journalists (ICFJ) under the banner of the Coalition Against Online Violence – a collection of more than 40 organizations convened by the IWMF to find better solutions to addressing digital attacks.

«Women journalists must be supported if they are to continue to expose injustice and amplify issues that are so often ignored,» said the IWMF’s Executive Director Elisa Lees Muñoz. «No journalist should face threats against their life and livelihood for uncovering uncomfortable truths. If we don’t address the epidemic of online violence, we eliminate the future of diversity in storytelling.»

Accompanying the launch of the hub is the release of the IWMF’s multi-lingual public service announcements, which are voiced by Al Jazeera’s Ghada Oueiss, Deutsche Welle’s Mimi Mefo, NBC News’ Morgan Radford and award-winning author and journalist Lydia Cacho; they are issued in Arabic, English, and Spanish. These video shorts encourage an end to online violence and call on newsrooms and the public to support and protect women journalists.

«Women journalists need a network of support to continue their work in news media, and to protect our functioning democracy,» said Craig Newmark of Craig Newmark Philanthropies. «I am proud to partner with the IWMF to expand the resources available to women journalists experiencing online attacks, which will enable a freer, more diverse press.»

While the journalism industry understands the dangers of physical attacks, online attacks are not addressed with the same urgency. In 2018, the IWMF and TrollBusters’ Attacks and Harassment: The Impact on Female Journalists and Their Work found that digital violence – intended to intimidate, sow disinformation, discredit journalism and create professional harm – was surging, with 63 percent of women journalists surveyed experiencing more than one type of attack or harassment online, specifically.

«As ICFJ’s research shows, online violence takes many forms and is especially harmful to women of color, women of minority religions and women in the LGBTQ community,» said ICFJ’s President Joyce Barnathan. «It does not respect global boundaries and it demands collaborative responses like those offered on the Hub.»

It is essential for members of the press to have a robust and open online presence, especially on social media platforms, to stay on top of breaking news, connect with sources, and report information as it surfaces. However, social media platforms do little to protect this core community of its members against abuse.

«The platforms enable and encourage the online violence that makes it so much harder for women journalists to do our jobs; in cases like mine, orchestrated online attacks are precursors to the weaponization of the law and persecution by the State,» said Rappler CEO Maria Ressa. «We have to fight back, we have to hold the enablers and perpetrators to account, and we are stronger together. This collaborative Online Violence Response Hub anchored by ICFJ and IWMF is an important intervention.»

In addition to the resources now available for women journalists on the Online Violence Response Hub, the IWMF works directly with newsrooms to plan and implement specialized preparedness, safety and security strategies for their staff members. The 19th, KQED, Mother Jones, The San Francisco Chronicle, The Seattle Times, and others have already received training from the IWMF and committed to making digital safety a priority within their newsrooms.

About the International Women’s Media Foundation
Founded in 1989, the International Women’s Media Foundation (IWMF) is the only global non-profit organization that offers emergency support, safety training, grants, skills building and reporting opportunities specifically for female journalists. We are making more women-produced reporting possible and work tirelessly to ensure a greater diversity of voices represented in the news industry worldwide. Follow the IWMF on Twitter at @IWMF, on Facebook at @IWMFPage and Instagram on @TheIWMF.