Highlights within the Quarter:

Growth in all key metrics – Users and ARR

During the June quarter the Company continued to experience substantial growth across all key metrics.

User numbers grew at a record rate for Dubber’s SaaS monthly subscriptions. The Company announced the launch of its Foundation Partner Program, with Cisco’s Webex Calling and UCM Cloud platforms as the first such partner. Foundation Partners will embed Dubber services within their offering as a standard and in-built feature – from which both Dubber and the partner then benefit from upgrading users to richer functionality and product offerings. Accordingly, Dubber’s subscriber numbers have significantly expanded in this program, and for reasons of both consistency and commercial sensitivity, the Company has chosen not to include these numbers at the current time. The increase in subscriber numbers, therefore, relates to standard Dubber subscriptions.

As previously indicated, the key growth metric relating to short term growth is the Company’s Annualised Recurring Revenue (‘ARR’) which has grown by $4.8m, to approximately $39m, continuing a trend established in the March quarter, a milestone period relating to comparative ARR growth on a quarter on quarter basis. 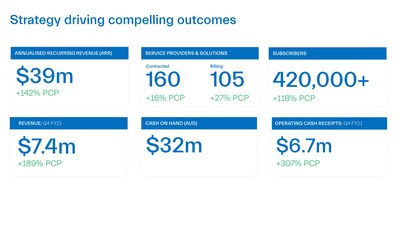 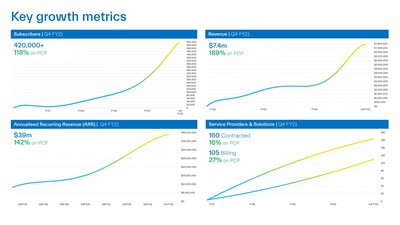 During the quarter, the Company continued to expand its footprint of service provider networks along with increasing penetration and revenue yield from its current telecommunication and UC platform partners.

Cisco as a Foundation Partner

During the quarter, the Company announced that it significantly expanded its commercial relationship with Cisco. Dubber is now a standard feature of every subscription for Cisco’s Global cloud telephony platforms Webex Calling and UCM Cloud. An entry level service ‘Dubber Go’ is included, at no extra charge, in every subscription enabling individual users to record calls which they alone manage. Customers can then upgrade to extended features such as extended storage, transcription and AI based features or expansion to compliance-based capabilities for the entire organization. Cisco provides Dubber a monthly license fee for this capability, which enhances its offering to their end customers.

The benefits for Dubber are significant:

Steve McGovern, CEO, Dubber: «Dubber and Cisco share a common vision of the way that voice data will become a critical resource for all businesses and users in the future. Our joint initiatives have significant ramifications for Dubber, notably in the Company’s two areas of primary focus: growing the Company’s ARR and expanding its telecommunications network footprint. Dubber is now a core feature on an important network for many Carriers, providing the opportunity to expand the same functionality to the Carrier’s other networks.  This provides opportunities for Carriers to add an important value-added service horizontally throughout their networks, and also provides a standardized experience for users.

This marks a major milestone in increasing the ubiquity of Dubber as the Unified Call Recording and voice data layer for the world’s leading telecommunication and collaboration platforms. We believe that customers worldwide will continue to prepare for, and respond to, increased regulatory and compliance obligations for their businesses in many markets and industry verticals. Embedding Dubber cloud call recording as a standard service will allow customers to meet these requirements, while providing them access to a host of advanced voice data services.»

The Dubber platform has been designed specifically for large scale availability across telecommunication and cloud communication networks, as opposed to legacy bespoke recording products for enterprises, which have historically been tied to on-premise equipment, capital expenditure and complex call centre environments.

The Company has previously highlighted an industry trend whereby large global service providers are releasing their own network offerings in conjunction with cloud collaboration platforms like Zoom Phone, Microsoft Teams and Cisco Webex Calling. The Company is experiencing significant demand for these services, driven by its Service Provider partners, particularly in the financial services and healthcare sectors, and primarily in markets like the UK, Europe and North America, where there are immediate needs for compliance solutions across distributed workforces.

The ability to capture recordings and voice data across multiple networks, and have them managed in a single environment, the Dubber Voice Intelligence Cloud, is a compelling proposition which should underpin and accelerate the Company’s growth.

Dubber has successfully integrated the acquisitions of Speik and Calln, both of which continue to demonstrate strong ARR retention and growth.  These acquisitions have not only provided outstanding development staff but have provided Dubber with key additional technology capabilities as seen in the recent debut of Dubber PCI Comply, based on core Speik technology.

As required by LR 4.7C.1 to 4.7C.3, expenditure amounts for the quarter ended 30 June 2021 on the Company’s activities on R&D, operations, advertising and marketing, personnel and administration are as contained in the Appendix 4C accompanying this report.  Operating costs include $1.869 million pre-paid for cloud services, a non-recurring expense, resulting in a significant discount to normal cost structures for such services.  The amount disclosed in section 6.1 of the Appendix 4C is for executive and non-executive director remuneration for the quarter, including superannuation.

Cash receipts for the quarter were $6.7m, in line with expectations from the Company’s ARR and revenue recognized during the quarter. The Company’s ARR is calculated as the next 12 months of subscription revenue net of any incentives.

For example, an agreement signed in July may have a first billing date of September in which case the ARR would be 10x monthly subscription revenue.  Dubber’s customers are predominantly service providers, which operate on varied payment terms, which can result in cash being received a further 60-90 days from billing. As a result, the ARR to revenue and cash receipt cycle can be across multiple quarters.

«The Company is very pleased to have continued its growth trajectory at a level established in the previous quarter. We are now one year into a five-year plan that is heavily focussed on expanding its network footprint, increasing ARR and developing revenue generating products and services which can be deployed at scale as a service directly from voice networks.

Our goal for the first year was to double the size of Dubber’s business – from a base of approximately $15m ARR and 190,000 subscribers, which the team has accomplished and exceeded.  The opportunities for take up of the Dubber platform, both at a Service Provider and an end user level, have also been accelerated against a landscape where there are multiple key drivers.

The widespread movement to cloud infrastructure has been brought forward by the effects of the global social and economic requirement for working from home.  Additionally, the communications sector has quickly expanded to meet these requirements, particularly with the prevalence of Cisco Webex, Microsoft Teams and Zoom services.  Traditional Service Providers in turn are seeking to enrich their cloud offerings both in line with, and competing against these offerings and, finally, there is an urgent need for the extension of compliance, and customer/employee experience capabilities by enterprises at all levels.

Service providers have both an incentive and the means to deliver these capabilities, and Dubber is uniquely positioned to provide unified call recording and voice data capture services as part of this transition. All of these trends reinforce our view that the ability to turn calls into AI-enriched data, will be a standard feature for every phone in the future.

This ASX release has been approved for release to ASX by Steve McGovern, CEO & Managing Director.

Dubber is unlocking the potential of voice data from any call or conversation. Dubber is the world’s most scalable Unified Call Recording service and Voice Intelligence Cloud adopted as core network infrastructure by multiple global leading telecommunications carriers in North America, Europe, and Asia Pacific. Dubber allows service providers to offer call recording for compliance, business intelligence, sentiment analysis, AI and more on any phone. Dubber is a disruptive innovator in the multi-billion-dollar call recording industry, its Software as a Service offering removes the need for on-premise hardware, applications or costly and limited storage. 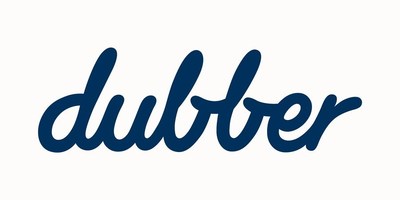