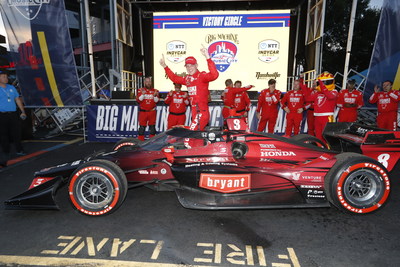 In the first of many incidents in the 80-lap contest, Ericsson hit the back of Sebastien Bourdais’ A.J. Foyt Racing Indy car, with Ericsson’s Chip Ganassi Racing machine rising high in the air after making wheel-to-wheel contact with Bourdais. Ericsson was assessed a stop-and-go penalty for avoidable contact, but came back to hold off a previously-dominant Colton Herta and score his second career INDYCAR victory.

Honda drivers and teams swept the top seven finishing positions today, with every Honda team featuring at least one driver in the top 10. Behind Ericsson, teammate and defending series champion Scott Dixon moved to second in the drivers’ championship standings with a second-place finish. Andretti Autosport teammates James Hinchcliffe and Ryan Hunter-Reay finished third and fourth, respectively; and Graham Rahal rounded out the top five for Honda.

In addition to Hinchcliffe, Ed Jones also had his best finish of 2021 in sixth for Dale Coyne Racing with Vasser-Sullivan. Championship leader Alex Palou ran seventh in a third Chip Ganassi Honda; while Helio Castroneves, in his first Indy car race since winning the Indianapolis 500, finished ninth for Meyer Shank Racing.

Quotes
Marcus Ericsson (#8 Chip Ganassi Racing Honda) Race winner, his second win of 2021 and second career Indy car victory: «It’s unbelievable. It just goes to show that anything can happen in INDYCAR. You can never give up. If you have a good team, and a good car, you can get to Victory Lane. This one is for all my guys. They repaired my car beautifully [after a start-line crash with Sebastien Bourdais]. The Honda engine was awesome, the power was great all day. I just can’t believe it. Colton [Herta] was so fast all weekend. To keep him behind while also saving fuel, I think was honestly one of my best performances. I’m sorry he [Herta] ended up in the fence there [in a late-race single-car crash], because he should be on this podium. But I’m just so proud of my whole team, I’m so proud and thankful.»

Scott Dixon (#9 Chip Ganassi Racing Honda) Finished second, moves to second in the Drivers’ Championship after 11 of 16 races: «Mentally, I think this was one of the most draining races on the schedule. With all the cautions, and even two red flags, it was really tough to focus on what you needed to do, strategy wise. Kudos to Honda, [teammate] Marcus [Ericsson, race winner] the Chip Ganssi team, and my guys in the pits. We did almost 50 laps on that last set of tires. It was good call, and gained us a bunch of positions, but definitely made the car difficult to hold onto at the end of the race.»

James Hinchcliffe (#29 Andretti Autosports Honda) Finished third, first podium result of 2021: «Thanks to all the fans coming out today, and sticking it out through the cautions and red flags. By the end, it was getting hard to see with the sun going down and a dark visor! But for us, after we got caught up in that early [multi-car collision], my guys called a great strategy to pit when we did.  We’ve had a rough year, and have had a lot of things go against us. So I’m really happy things went our way today here in Nashville. It’s nice to be back on the podium.»

Kelvin Fu (Director Program Management, Honda Performance Development) on today’s Honda sweep in the inaugural Big Machine Music City Grand Prix: «It was a great inaugural event here in Nashville. I think everyone really enjoyed it and the fan turnout was fantastic.  Congratulations to Chip Ganassi Racing for a well-earned one-two finish and to Marcus Ericsson on his second win of the season. Thanks to all our Honda teams, really, as every one of our five teams had at least one driver in the top 10 at the finish on a tight and very challenging course. We were glad to be back racing after a four-week break in the schedule, and we look forward to the Indy road course event next week.»