MADRID, Sept. 9, 2021 /PRNewswire/ — Sorare, the fantasy football platform, has today announced a partnership with Spain’s LaLiga to launch non-fungible tokens (NFTs) for all of its players, creating new revenue streams for LaLiga Clubs via a new category of licences. 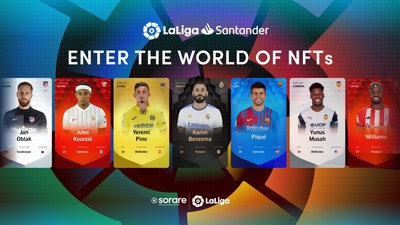 Thanks to this offering, LaLiga fans, collectors and fantasy football players will for the first time be able to freely trade and play with digital cards of players from LaLiga. Sorare’s mission is to build «the game within the game» and to give fans the platform to celebrate, share and own their football passion.

The partnership represents a major milestone for Sorare as it strikes a deal for the first time with one of the biggest leagues in the world, home to world-class football clubs such as Real Madrid, FC Barcelona, Atlético de Madrid, Villarreal CF, Valencia CF, FC Sevilla and Real Sociedad, among many others. Sorare plans to partner with every one of the world’s top 20 football leagues by the end of 2022.

The partnership, which covers both LaLiga Santander (first division) and LaLiga Smartbank (second division), is a significant development for LaLiga as it moves into the NFT space for the first time, highlighting the global interest in the fast-growing NFT card space which has sold more than $130M in cards this year.

«At LaLiga we are always looking for innovative ways to offer our fans new and exciting experiences and to broaden the appeal of our competition, the greatest in the world. This partnership with Sorare, the most exciting sports NFT projects today, enables us to reach new audiences globally and gives existing fans additional ways they can get involved with the players and the clubs they love.»

«NFTs are the future of global sports fandom because they allow fans to come together and to feel ownership of the sports they love.

«This partnership isn’t just a sign of Sorare’s growing leadership in the NFT sports space, it is a major signal of intent by the sporting world that it sees Sorare’s unique ability to connect fans with sports through NFTs as a crucial part of their plans for the future.

«LaLiga is one of the best leagues in the world, home to some of the most exciting clubs and footballers on earth. We are very proud that they have become our first ever league partnership, and we are looking forward to working together in the years ahead.»

Sorare cards are NFTs, meaning each card is unique, scarce, and its ownership can be publicly verifiable via the blockchain. Sorare’s combination of NFT technology with sports cards and a fantasy game is the leading next-gen offering within football, and backed by football legends including Gerard Piqué, Antoine Griezmann and Rio Ferdinand. Through the collecting, owning and trading of limited edition digital collectibles, Sorare has created a unique game experience where users can own their game, build real-world connections and protect and control their assets in a secure space.

Sorare’s next-generation gaming experience will help LaLiga and its clubs to expand their international brands by reaching new audiences of fans, including crypto-enthusiasts in the US and Asia, where Sorare is growing strongly, and fantasy gamers across the globe. The partnership opens up a new revenue stream for LaLiga clubs by creating an entirely new licensing category: NFTs.

The partnership means that Sorare now has the majority of the top 100 football clubs in the world under license, including global clubs such as Liverpool FC, FC Bayern Munich, Paris Saint-Germain FC, and Juventus FC (see below for a full list).

Founded in 2018, Sorare was created by football fans for football fans. Through blockchain digital collectibles and its global fantasy football, the company is on a mission to become ‘the game within the game’.

Sorare is transforming online sports fandom and giving its community a new way to connect to the clubs and players that they love. The platform had a card sales volume of over $130m since January 2021 across 160 countries. Based in Paris, Sorare is funded by a world-class team including Benchmark, Accel Partners, Headline, and footballers Gerard Piqué, Antoine Griezmann and Rio Ferdinand.

LaLiga is a global, innovative and socially responsible organisation which is a leader in the leisure and entertainment sector. It is a private sports association composed of the 20 public limited sports companies (SADs) and clubs of LaLiga Santander and the 22 of LaLiga SmartBank, and is responsible for organising professional football competitions in Spain. In the 2019/20 season, LaLiga reached 2.8 billion people globally. With its headquarters in Madrid (Spain), it is present in 41 countries through eleven offices and 44 delegates. The organisation carries out its social work through its foundation and was the world’s first professional football league to establish a league for intellectually challenged footballers: LaLiga Genuine Santander.

A)  How the fantasy game works:

In Sorare, users, called Managers, create lineups consisting of 5 players: a goalkeeper, a defender, a midfielder, a forward, and one other outfield player.

Managers enter these lineups in different tournaments, each with their own entry requirements such as the age of the players or the region their club plays in.

Based on the players’ performance in real life games, all entered lineups get ranked against one another in a leaderboard. The higher a Manager’s position in a leaderboard, the better the card prizes they earn.

Cards come in different scarcities: Each football player has 100 Rare cards, 10 Super Rare cards, and a single Unique card. Managers compete against each other to collect these scarce cards on the Sorare Marketplace.

BNI® USA Is Taking A Great Membership & Making It Even Better