WARSAW, Aug. 25, 2021 /PRNewswire/ — Poland’s largest national park, the Biebrza National Park is a natural treasure on the map of Europe and one of the last valleys in Europe not destroyed by man. Meanwhile, approximately 40% of the land does not belong to it. The Polish Żubr brand is working towards securing this priceless area – in cooperation with the park authorities, Żubr is helping to buy land that should be actively protected. 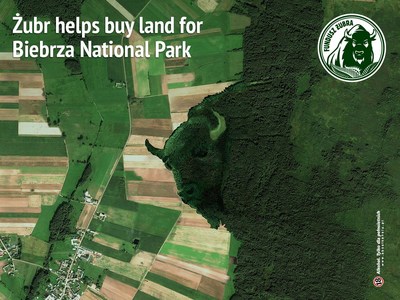 This is also a brands response to the postulates of the European Union and the United Nations calling for giving lands back to nature in order to stop the climate and environmental crisis. In keeping with this trend and with reference to the alarming United Nations report from August of this year, the Polish Żubr beer brand decided to help the authorities of the Biebrza National Park to protect areas that are priceless for endangered species of animals. That is why Żubr has embarked on long-term cooperation with the Biebrza National Park, in order to recover plots of land that are lying on its territory.

Approximately 500 million m³ of water has accumulated in the wetlands of the Biebrza Valley, one of the last valleys in Europe not destroyed by man.  The marshes cool the climate, are islands of biodiversity, act as natural air conditioners and, in addition, constitute a unique habitat for protected species of birds that are admired by the whole of Europe. However, more than 40% of the Biebrza National Park still belongs to private owners and the park staff are unable to conduct appropriate nature conservation activities there, such as protecting habitats, regulating tourist traffic and preventing the destruction of nature as a result of the development of agriculture or construction.

The activities in the Biebrza National Park are a part of consistent implementation of the mission of Żubr  brand belonging to Asahi Europe, which is based on the active support of wildlife species by reinvesting some of its profits in them. It pursues this mission in the most valuable natural regions of Poland. It supports various nature conservation initiatives – long-term initiatives, such as cooperation with the Białowieża National Park, and those that require quick action, such as assistance during fire in the Biebrza Valley.

«The Żubr brand was created 18 years ago around the symbols of Polish nature. In the brand’s advertisements, the brand hero – Żubr (representative of the European bison) – plays the role of the Guardian of the Forest, who cares for all of its inhabitants. As our brand draws from the world of Polish nature, we feel responsible for actively supporting its protection,» says Urszula Czerniawska-Kapeluch, Senior Brand Manager of the Żubr brand.

In 2019, the Żubr brand donated a million zlotys to the protection of endangered species; in 2020 it funded specialist equipment worth 1 million zlotys for the Białowieża National Park, while a further million will be donated this year to the battle for the preservation of wildlife in its most natural form.

For more information on the Fund’s activities please visit: www.funduszzubra.pl

Secondary Market Research Sourcing and Procurement Report Forecasts the Market to Have an Incremental Spend of USD 11.9 Billion | SpendEdge